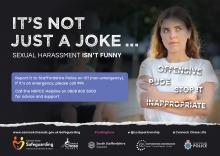 A new campaign addressing harmful sexual behaviours such as harassment and assault has launched in secondary schools across the District this week as part of Cannock Chase Council’s ongoing safeguarding work.

The Council’s Community Safety Team has commissioned Loudmouth Education and Training to run their new educational resource on harmful sexual behaviours, ‘Calling It Out’, for pupils in key stages three to five.

‘Calling It Out’ is a new theatre in education programme designed for students in years 9 to 13 and supports the ongoing work in schools to create a culture where sexual harassment and abuse are not tolerated.

The programme uses drama, a character question and answer session and discussion to raise the pupils’ awareness of harmful sexual behaviours, where these behaviours are coming from and alternative positive behaviours.

In the drama the main characters, Sam and Wes, have their friendship tested as they both learn more about the huge impacts everyday incidences of sexual harassment and assault can have on girls and young women and how we all have a role in safely challenging and reporting these behaviours.

After the drama, the students get the opportunity to ask Sam and Wes questions about the key themes for the drama. Small group discussions are held to encourage students to look at different scenarios and to discuss whether they are acceptable or unacceptable including discussions on pornography, consent and misogyny.

The session ends with information of where the pupils can go for help if they have experienced harmful sexual behaviours and want further information and support.

This forms part of the Council’s wider safeguarding work and has been funded by the Staffordshire Commissioner’s Locality Deal Fund.

Councillor Bryan Jones, Deputy Leader and Portfolio Leader for Neighbourhood Safety & Partnerships, said: “Loudmouth have delivered a series of successful education programmes in our local schools over the last 2 years, and all have been effective in communicating important safety messages to our young people.

“The ‘Calling it Out’ campaign will help to raise awareness of the impacts of harmful sexual behaviours on individuals, as well as providing an increased knowledge of how to safely call out and report incidents and where to go for help and support.

“Throughout this programme, young people will be encouraged to contact their Designated Safeguarding Lead at their schools or to contact the NSPCC’s Helpline on 0808 800 5000 for advice and support.

“It will help to not only raise young people’s awareness of harmful sexual behaviours, but also give them the tools and information they need to seek support if they have any concerns for themselves or their friends.”

Eleanor Vale, Director, Loudmouth Education & Training said “We are so pleased that Cannock Chase Council have taken the innovative step to use theatre in education with young people as part of their campaign to address harmful sexual behaviour. It is vital that both young men and women see how these behaviours can impact people’s lives and how we all have a role in stopping this by behaving respectfully towards each other and calling out inappropriate and harmful behaviours.”

For further information about this campaign contact the Community Safety team on 01543 464477 or visit www.cannockchasedc.gov.uk/safeguarding