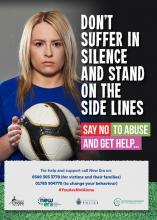 Cannock Chase Council is urging football fans to ‘show domestic abuse the red card’ with the start of the World Cup this week.

Previous national research has shown that incidents of domestic abuse can rise when England play in a tournament, so the Council has teamed up with partners from the local Community Safety Partnership to deliver some important messages.

With the first football game kicking off this weekend, people will be watching the games from their local pub or home. This could increase tensions within households, resulting in incidences of domestic abuse.

In response to this, the Council’s Community Safety and Partnership team has joined forces with local partners including Staffordshire Police, New Era (domestic abuse service), the Staffordshire Commissioner’s Office and local authorities across Staffordshire to relaunch their domestic abuse campaign over the football season.

The campaign ‘Show domestic abuse the red card’ raises awareness of the support services available for both victims and perpetrators.

Useful contact cards and posters will be distributed to pubs across the District as well as a range of online messages and advertising through the Council’s social media platforms.

A new video has also been produced to highlight the support available and to reassure victims and perpetrators that they are not alone.

The campaign encourages perpetrators of domestic abuse to get help from New Era Domestic Abuse Service on 01785 904770, an organisation which offers specialist domestic violence prevention services.

The campaign also encourages victims, individuals and families who have concerns to report abuse and get support from New Era’s Domestic Abuse Service’s Staffordshire and Stoke-on-Trent 24-hour confidential helpline on 0300 303 3778 or access their 24/7 live chat facility at www.new-era.uk

Councillor Bryan Jones, Portfolio Leader for Community Safety and Partnerships, said: “It is a sad fact that incidents of domestic abuse rise sharply during major football tournaments. This campaign continues to help raise awareness of the support services available to both victims and perpetrators as well as sending out a clear message that domestic abuse is completely unacceptable.

“If you are experiencing domestic abuse or know someone who is, please contact New Era and they will be able to support you.  Please show domestic abuse the red card - if you become a perpetrator, there will always be consequences to your actions. Get help today.”

Chantelle Thompson, New Era’s head of service, said: “Football tournaments like this one can be a great way of bringing communities and families together. However, sadly, they often coincide with an increase in referrals to services like ours.

“But it’s not an unfavourable match result or someone drinking too much alcohol that causes domestic abuse. Domestic abuse is caused by one person wanting to coercively control another. It’s never acceptable and it’s illegal.

“If you’re experiencing domestic abuse, or you want support to change your abusive behaviour, we can help you. New Era supports adults and children of all ages, genders and ethnicities living Cannock and elsewhere in Staffordshire and Stoke-on-Trent.”