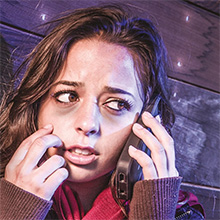 How Safe do Women & girls feel when walking home after a night out or walking alone anywhere?

The data comes two months after the release of the government’s new Tackling Violence against Women and Girls Strategy; launched in light of the increased public attention, anger and distress about violence against women and girls following the murders of Sarah Everard, Bibaa Henry, Nicole Smallman and many others.
The data confirms what women’s organisations have long known and sounded the alarm about: that being followed, harassed and assaulted are almost universally shared experiences of being a woman and girl, and that the threat of men’s violence leads to additional “safety work” and a restricted sense of freedom.

Here in Cannock Chase district, we have launched a campaign to educate people around the help that is on offer to both make them feel safe when out and about and to also encourage them to report when and where they don't feel safe.

The Community Safety Team work in partnership with Staffordshire Police, who ensure that perpetrators of any offences are dealt with proactively and robustly, with all victims safeguarded and supported at every step

More resources you may find useful:

A new campaign addressing harmful sexual behaviours such as harassment and assault has launched in secondary schools across the District this year as part of Cannock Chase Council’s ongoing safeguarding work.

StreetSafe is a pilot service for anyone to anonymously tell us about public places where you have felt or feel unsafe, because of environmental issues, eg street lighting, abandoned buildings or vandalism and/or because of some behaviours, eg being followed or verbally abused.

Please note: 'StreetSafe' is not for reporting crime or incidents.

Everyone’s Invited is a safe place for survivors of Sexual Assault in the home/school/workplace/public to share their stories completely anonymously. The act of sharing their story with Everyone’s Invited allows many survivors a sense of relief, catharsis, empowerment, and gives them a feeling of community and hope.

Ask for Angela is the name of a campaign in England that started in 2016 that is used by bars and other venues to keep people safe from sexual assault by using a codeword to identify when they are in danger or are in an uncomfortable situation. When an establishment uses this program, a person who believes themselves to be in danger can ask for Angela, a fictitious member of the staff. The staff will then help the person get home discreetly and safely by either escorting them to a different room, calling them a taxi and escorting them to it, or by asking the other party member to leave the establishment.

The story behind the Hollie Guard App:

Hollie Gazzard was stabbed 14 times in broad daylight in front of colleagues and clients at the salon where she worked on 18 February 2014. The perpetrator was Hollie’s ex-boyfriend, 22-year-old Asher Maslin, who had subjected Hollie to domestic abuse since the previous year.

Hollie Guard is a free personal safety app that can be downloaded onto any iOS or Android device.

With Hollie Guard, if ever you feel threatened, you can send out an alert by either shaking your phone or pressing the icon button. Once you activate an alert, your location along with video and audio evidence is automatically sent to your emergency contacts via SMS and/or email. Your emergency contacts can then take action to help you quickly.

There are multiple features which can be used:

Journey Feature - This ensures safe travel by providing real-time updates as users move between two places.
Meeting Feature - Meetings allow users to identify when they are going to a meeting with a risk factor. A timer can be set, and an alert is automatically created.
Man Down - For users in situations where injury or personal immobilisation is a possibility by flagging sudden deceleration, non-movement & impact.
Reports - Reports allow users to record and geotang incidents within the app. All reports will get saved to the users account, not on the device.

As well as all the features of Hollie Guard, you can now choose to upgrade your service to Hollie Guard Extra, a brand-new service through which an alert response centre will monitor any alerts you trigger.