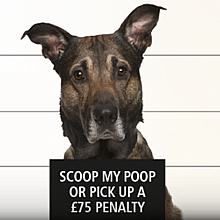 Dog faeces (waste) may contain worms which can cause serious eye disorders in children and adults. Regular worming can help reduce the likelihood of worms in faeces.
Faeces is unpleasant to stand in, but also, think about blind people and people with wheelchairs and pushchairs or prams.

The Council introduced a Dog Control Order (hyper link to DCO) with effect from April 2010 making it an offence for the person in control of a dog to not to remove faeces from land immediately after the dog has fouled.
Cannock Chase District Council can prosecute a person in control of a dog if they fail to remove the faeces forthwith (immediately) after the dog has fouled. Alternatively, the Council may issue a £75 Fixed Penalty. Council Enforcement Officers patrol the district and will issue anyone caught breaking the law with a Fixed Penalty Notice.

Q. Why is the Council enforcing dog fouling penalties?
A. We want to encourage local people not to leave dog waste and instead help keep the environment clean. We receive around a 100 complaints each year on this subject and take the matter very seriously.

Q. What are the penalties?
A. Authorised officers can issue fixed penalty notices of £75 for dog fouling offences. Failure to pay may result in a prosecution before the Magistrate Court where the maximum fine is currently £1,000.

Q. Where can offenders get fined?
A. Any public place including:
Recreation Areas
Roads
Pavements
Land belonging to hospitals, schools and colleges
Car Parks
...Almost anywhere!
We intend to pay particular attention to areas where there have been dog fouling problems in the past, including routes to and from schools, outside shops and similar fouling 'hotspots'.

Q. Do offenders have to pay the fine on the spot?
A. No, the offender will have 14 days to pay the £75 fixed penalty fine. If the penalty is paid within 10 days the fee is reduced to £50.

Q. What happens if the offender refuses to pay the fine?
A. Court action will be initiated, which can lead to a fine of up to £1,000.
Q. What happens if there isn't a dog waste bin nearby?
A. If there isn't a dog waste bin handy, it can now be disposed of in ANY litter bin. If there aren’t, please be responsible and take your dog waste home with you and place in your GREEN wheelie bin. Leaving it at the roadside, on a footpath or hanging from a gate post or tree is not only acceptable and it is littering an offence.

Q. If I report a dog owner and give a statement, will they find out my name and address.
A. No, your details would not be released without your permission. In the majority of cases, the dog owners pay the Fixed Penalty and no further action is required. If the penalty is not paid an enforcement officer will contact you to confirm whether you are willing to go to court. If you are not, the Council would not be able to pursue the prosecution.
Please remember If offenders don’t pay the Fixed Penalty and are not prosecuted, it does send out a message to them and other irresponsible dog owners.

You can report issues on-line using our online form.
Alternatively, you can call the Council’s Contact Centre on 01543 462621.

If you can identify offender or the times they are walking their dog and are willing to assist Council Enforcement Officers in tackling the irresponsible dog owner, please advise the receptionist or email the details to: environmentalhealth@cannockchasedc.gov.uk