On behalf of Cannock Chase District Council and the residents of the District, it was with great sadness with which we received the news of the death of Her Majesty The Queen. Our condolences go out to The King, The Queen Consort and the Royal family. Our thoughts are with them during this sad time. Queen Elizabeth II has served our country with both distinction and honour throughout her long and distinguished life, and as our monarch for the past 70 years.

Tributes
Chairman of the Council, Councillor Martyn Buttery said: "I am deeply saddened by the news of Queen Elizabeth II's passing, her life was dedicated to serving our country and was truly inspirational. I am, as I'm sure everyone is, extremely grateful for her lifelong dedication to our nation. May she rest in peace."

Leader of the Council, Councillor Olivia Lyons said: “It is with incredible sadness we come to terms with the loss of our beloved Queen. Our community will collectively mourn the loss of our nation's longest serving monarch and a period of national mourning shall continue for 10 days. This is a time to reflect on the Queen's 70 years of service, duty and devotion with the fondest affection and admiration.

"Her Majesty the Queen has continually been the beacon of courage that has shaped our nation. The Queen's strength has guided us through some of the darkest of times, whilst she has also joined with communities up and down the land to celebrate some of the best. The Queen's unwavering dedication is a source of inspiration, and her kindness will continue to warm each corner of our nations.

"As a mark of respect, the Council’s flag is flying at half-mast, and we send our deepest sympathies to the Royal family. Thank you, Ma'am, for everything.”

Cannock Chase Council’s Chief Executive, Tim Clegg said: “It is with great sadness that we learned of the death of Her Majesty, Queen Elizabeth ll.  Her Majesty has been a great servant to our country and on behalf of the authority we send our heartfelt condolences to the Royal family. Information of how we, as a District, will mark the passing will be placed on the Council's website.”

Signing the book of condolence 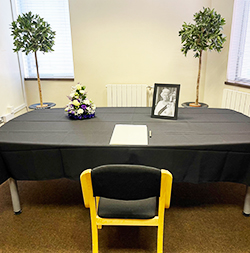 There will be a book of condolence in the Chase Room at the Civic Centre, Beecroft Road, Cannock for residents to sign and leave their brief messages of condolence, as from 10am on Saturday (10 September). The book will close for messages at 5pm on Tuesday 20 September.

The Civic Centre is open from 9am to 6pm Monday to Friday and Saturday 10am to 4pm. In addition there are two evening sessions where you will be able to sign the book of condolence; on Tuesday 13 September and Thursday 15 September between 6pm and 8pm. Please note that on Monday 19 September, the day of Her Majesty, The Queen's Funeral, the book of condolence will only be available for signing between 2pm and 6pm.

Those wishing to sign the book of condolence can park for free, in the car park to the side of the Civic Offices, with effect from the morning of Monday 12 September.

Anyone who would like to add a message to the book of condolence at the Civic Centre but is unable to do so in person, can email their brief message of condolence to civic@cannockchasedc.gov.uk or send it by post to Civic, Cannock Chase Council, Beecroft Road, Cannock WS11 1BG.

There is also a national book of condolence to leave messages at the Monarchy's website www.royal.gov.uk

The local book of condolence will eventually be added to the Staffordshire Archives, while the national book will be part of the National Archives.

Hednesford - Pye Green Community Centre
Monday to Friday 9.30am to 1pm and until 1pm on the day of the funeral (19 September).

We understand that many other churches in the District have their own books of condolence, including St Luke's in Cannock and St Augustine's in Rugeley.

Proclamation of the new King
Across the nations, ceremonies will be taking place to proclaim the new King (King Charles III). On the steps leading to the entrance to the Civic Centre in Beecroft Road in Cannock, this will see the Chairman of Cannock Chase District Council read out an official Proclamation for the new Monarch, attended by the Deputy Lieutenant of Staffordshire, the Leader of the Council, and the Chief Executive.

This historic moment, which residents will be welcome to attend, is scheduled to take place at 2.30pm on Sunday 11 September. It will last about 15 minutes. The national anthem will be played for God Save the King.

Half-masting of flags
The union flags at Cannock Chase District Council buildings and sites are being flown at half-mast throughout the period of mourning.

National Moment of Reflection
A National Moment of Reflection for Her Majesty, The Queen has been announced for Sunday 18 September at 8pm. This will be a minute's silence to reflect on The Queen's reign and her life, which we are invited to participate in from home, or wherever we happen to be at the time. In the District, St Luke's Church in Cannock will be marking this event at 8pm on Sunday 18 September.

Funeral of Her Majesty The Queen
A State Funeral for the Queen will take place in Westminster Abbey, London on Monday 19 September. The day has been made a Bank Holiday and as a result Cannock Chase Council's offices will be closed on 19 September, with telephone lines re-opening at 9am and the Civic Centre Reception at 10am on Tuesday 20 September.

Order of Service for the Proclamation of the new King