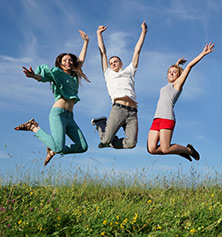 Welcome to the Your Community Page.

Here you will find useful information about local groups, organisations and charities as well as regular community activities for adults, families and young people. (please note these groups are run by external bodies and are not affiliated to Cannock Chase District Council)

A Police force-wide summer anti-social behaviour campaign is underway in Staffordshire promoting the importance of all generations showing consideration and tolerance to each other.

Respect: It's a two way street', is asking people to think about how their actions affect others. Anti-social behaviour can be caused by people of all ages and from different backgrounds, it's not confined to young people.

Chief Superintendent Jeff Moore, force lead on ASB, said: "Anti-social behaviour can mean different things to different people, but basically it is any kind of repeated behaviour that affects your quality of life. We never underestimate the impact ASB can have on an individual or community and we're committed to continually working with our partners and giving the best service possible to our communities."

As part of the campaign Police Community Support Officers (PCSOs) and officers will engage with young people, asking them their concerns and explaining how rowdy and inconsiderate behaviour can badly affect others, particularly the elderly.

Ch Supt Moore continued: "Some people raise concerns that they feel intimidated if they see a group of young people congregating in an area but they may not be doing anything anti-socially, just meeting up with friends.

"Those whose behaviour is anti-social will be dealt with accordingly. Officers and PCSOs will also continue to patrol hotspot areas engaging with young people and dealing with any problems."

Some of the hot tips include:

Being near water on a hot sunny day can be tempting for some to take a quick dip to cool off, but there are many dangers of swimming in rivers, canals or ponds particularly in remote areas or quarries.

Wearing a helmet when riding a bike and not using a mobile phone crossing the road will cut the risk of a being involved in a crash and injured.

"We would ask parents to discuss these issues with their children to keep them safe. Help young people to join in positive activities where they can have fun, meet new friends and keep away from committing crime or anti-social behaviour. It will also give you peace of mind knowing they are safe," added Ch Supt Moore.

For calendar of events visit www.staffordshire-pcc.gov.uk/space or phone 01785 232491 or contact your local authority.

There are plenty of schemes that young people can also get involved with to have fun, learn new skills and develop social and team building skills. For example:

and other well-known clubs such as Scouts , Girl Guides.

Would you like the Vice Chairman to attend an event?

If you would like to request the Vice Chairman to attend your event please email louisegriffiths@cannockchasedc.gov.uk.

View Chairman of the Council here

The Chairman of the Council for Municipal Year 2021-22 is Councillor Doug Smith.

Would you like the Chairman to attend an event?

If you would like to request the Vice Chairman to attend your event please email louisegriffiths@cannockchasedc.gov.uk.

View Chairman of the Council here

Situated on the North Rhine in Westphalia, Datteln, a small town with a population of 37,500, lies at the heart of Germany's canal network.

Since twinning began in 1971 numerous close personal relationships have been forged with Datteln.  Every year clubs, societies and local people visit the area to make new friends and renew existing friendships, particularly in August when the town hosts its annual Kanalfestival.

Visit the Datteln web site - if you speak German!

The red mailbox at the main entrance of the town hall is a gift from our English twin town of Cannock. Although it looks historic, it is very happy to receive your mail. And: It is emptied every weekday.

See the red mailbox on their Facebook page by following this link.

Links between Cannock Chase and Western Springs were formed when the twinning with Rugeley took place in 1957. Western Springs, when it was originally settled, took its name from an abundance of cool, clear spring water.

With a population of 12,000, the town is a convenient 25 minutes fast express ride from Chicago. Townsfolk have always made visitors very welcome and, despite the distance between both communities, the bonds of friendship have blossomed with occasional visits and regular correspondence.

Cannock Chase Council uses YouTube to share videos about the work it does, its people and its events.

Twitter is a free social networking service that allows its users to send and read other users' updates (otherwise known as tweets), which are text-based posts of up to 140 characters in length.

Cannock Chase Council 'tweets' a few times a day about news and events. You can follow us at:

Facebook is a free social networking website. users can join networks by city, workplace, school, and region to connect and interact with other people.

For one reason or another (mis-typed URL, faulty referral from another site, out-of-date search engine listing or we simply deleted a file) the page you were after is not here - this site has recently undergone a major re-working, so that might explain why you got this page instead.

We apologise for any inconvenience caused.