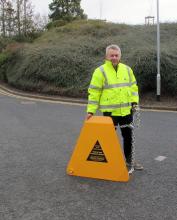 Cannock Chase Council officers will now be able to use wheel clamps on vehicles involved in fly tipping.

The powers given to Environmental Health allow officers to seize a vehicle and its contents where they believe it is being, has been or is about to be used to fly tip.  The powers also apply where waste is carried in a vehicle in the course of a business, or for profit, and the driver is not a registered waste carrier.

The wheel clamps can be fitted in seconds and will prevent the vehicle being moved while the officer waits for the recovery vehicle to arrive.  Seized vehicles can be retained by the Council whilst the offence is being investigated and up until the matter is heard in Court.  Magistrates then have a range of powers on conviction that include ordering that the vehicle be forfeited and that the offender be disqualified from driving.  If the vehicle is not properly claimed, it is sold and the revenue retained by the Council to fund further work to deter, disrupt and detect fly tipping.

Councillor John Preece, Environment Portfolio Leader, said “If the maximum penalty of five years imprisonment and an unlimited fine is not already a sufficient deterrent, losing their vehicles should send a strong message to anyone involved in fly tipping that it’s time to quit.  The Council has already seized two vehicles in recent months, with one being sold for more than £7,000 which has paid for these wheel clamps and more.  The public need to be aware that if their waste is found fly tipped, they will be visited by our officers and must be able to prove who they gave the waste to and that they checked that they were registered.”

To help prevent fly tipping, residents and businesses are reminded that if they have waste collected, the law requires that they check the person they employ to do so is a registered waste carrier.  They should ask for the person’s registered waste carrier number which can be checked by calling 03708 506 506 or online at www.gov.uk.  The details of the person and vehicle used to collect the waste should also be retained.

If you witness fly tipping you should record the date, time and location along with the details of the vehicle, the people and the waste involved and contact the Council on 01543 462621.  If the offence is in progress, you should call 999.  To provide information anonymously call CrimeStoppers on 0800 555 111.