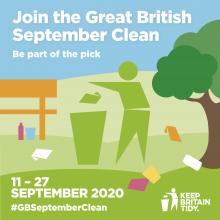 The campaign which runs from 11 September until 27 September will see up to half a million people taking action to clean streets, parks and beaches across the country.

The Council`s Street Cleansing team is encouraging local residents and community groups across Cannock Chase District to get involved.

This year`s campaign will not only see tonnes of litter being removed from the environment on our doorstep, it also aims to rescue thousands of the plastic bottles and aluminium drink cans that are simply thrown on the ground but could very easily be recycled.

Councillor Josh Newbury, Cabinet Member for the Environment and Climate Change, said: “We are calling on residents to help keep their local environment clear and tidy by taking part in the country’s biggest ever clean up. Even just an hour of litter picking can make a big difference to our green spaces, footpaths and roads.

“If you would like to get involved in an organised litter pick, the Council can help by providing litter picking equipment and will collect the bags of rubbish you pick up”.

Earlier this year, Keep Britain Tidy were blown away by the support from everyone – volunteers, local authorities, charities and businesses – for the Great British Spring Clean, which was due to take place from 20 March - 13 April.

With more than 680,000 volunteers promising to give us their time, the enthusiasm and excitement it generated exceeded all their expectations.

However, with their first priority to make sure everyone stayed safe and well, they postponed this year’s campaign due to Covid-19 which is why it will now be taking place this month.

If you would like to take part, contact the Council’s Street Cleansing team on 01543 462621 or email streetcleansing@cannockchasedc.gov.uk.

To find out more about the Great British September Clean and how the Council is supporting this initiative, visit the Council's campaign page.