`Crushing time` for fly-tipper caught out in Cannock area 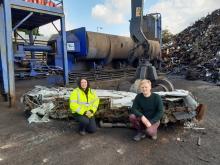 A fly-tipper apprehended in Cannock Chase District in August is feeling rather dejected after the Ford Transit Van he was using to illegally discard waste was well and truly crushed this week at a vehicle crushing site.

The Council’s Environmental Health Team seized the vehicle, registration number NT03 CYP, after it had been witnessed being used for fly tipping in the Chadsmoor area of Cannock. Under Section 34B of the Environmental Protection Act 1990 the Council can seize vehicles involved in waste offences such as fly tipping or for failing to have a waste carrier’s registration.

On 10 August a Notice of Seizure was published on the Council’s website and social media giving details on how to claim the van, but as the van was not claimed within the timeframe it was then sent for crushing at Autobits Scrap Metal in Willenhall.

The owner, from Chadsmoor, has also been issued with two fixed penalty notices of £400 and £300 respectively.

Councillor Josh Newbury, Portfolio Holder for the Environment and Climate Change, said of the seizure and the eventual crushing:

“Fly tipping has been a real problem for us this year with 300 cases needing to be dealt with between January and June alone. We need to tackle it as the perpetrators often contact low income households who then leave themselves vulnerable to prosecution. Householders have a duty to ensure their waste is transported by an authorised person holding an official waste carrier’s licence; otherwise they face an unlimited fine.

“Furthermore, the vehicles fly-tippers use often go untaxed and uninsured and have no MOT. We make no excuse for seizing such vehicles to disrupt and deter crime and make sure they can’t be used again for this highly anti-social and illegal practice.

Cannock Chase Council follows the SCRAP code which it is asking residents to note:

Suspect all waste carriers. Don't let them take your rubbish until they provide proof of registration. Note their vehicle's registration plate.

Refuse any unexpected offers to have your rubbish taken away

Paperwork must be obtained: a proper invoice, waste transfer note or receipt, including a description of the waste being removed and the waste carrier’s contact details

The Council is now offering a £250 reward to anyone who provides evidence that leads to the successful conviction of any person, business or other organisation involved in fly tipping waste in the District. These offences carry a maximum penalty of five years imprisonment and an unlimited fine. Residents can report fly-tippers and fly tipping to environmentalhealth@cannockchasedc.gov.uk

You can watch our video about the crushing at https://youtu.be/TlMptUJ26Ho