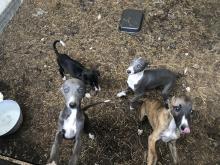 Mr Bramwell was sentenced to 18 weeks for animal welfare and licensing offences and a further 52 weeks for fraud.  He will serve a minimum of 35 weeks in custody and then be released on licence and remain on licence for 12 months.  He has also been disqualified for keeping any animal for 10 years, with no review for 5 years.

This conviction is the end of a complex investigation for Cannock Chase Council, which started in July 2018, following a visit to land on Power Station Road in Rugeley for an unrelated matter.

Numerous animals were discovered hidden inside vehicles and sheds with no water or food.  They were overcrowded, surrounded by faeces and flies and showing signs of disease.

A local vet was engaged to assess the animals; and 27 dogs and 2 raccoons in varying states of distress were subsequently taken into the Council’s possession.

The Council cared for the animals, some of which required veterinary treatment, whilst the Dogs Trust volunteered to find permanent homes for them.

The subsequent investigation showed that the occupier of the land, Kevin Bramwell was breeding dogs and selling them through several websites.  Adverts were traced back to 2014 and totalled almost £50,000.  By not having the required licences he was able to operate under the radar and with complete disregard to the welfare of the animals.  Mr Bramwell preyed on unsuspecting members of the public who were unwittingly buying from this illegal puppy farm, in the mistaken belief that he was a legitimate vendor.

Councillor John Preece, Environment Portfolio Leader said “To anyone looking to have a puppy, please consider rehoming a rescue dog from one of the recognised charities that specialise in caring for stray or abandoned dogs.  If you do decide to buy privately or from a breeder, please make reasonable enquiries about the vendor, ensure you see the mother and puppies together at the place where they were born and raised.  Check for proof of vaccinations, microchipping and worming.  If it’s a breeder, check they have the appropriate licence from the Council for breeding dogs or selling pets.

”The best outcome from this case is that the 29 animals were successfully rehomed.  I must thank the Dogs Trust for their support in achieving this.  To anyone considering operating an illegal puppy farm within the District, this case shows you will be found and you will be prosecuted as demonstrated today.”