Seized lorry to be auctioned 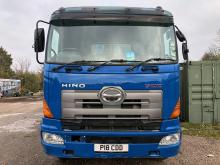 A lorry seized by the Council following its involvement in fly tipping is due to be auctioned next week.

The lorry was seized by Environmental Health Officers within days of it being used to fly tip waste in the District in August 2019.  Although the driver ran from the vehicle at the time it was stopped, the offences continue to be investigated.

Mike Edmonds, Head of Environment and Healthy Lifestyles, said “Seizing vehicles that are used to fly tip stops further offences from being committed, disrupts criminal behaviour and hits the fly tippers where it hurts – their pocket.  The proceeds from the auction will go towards funding further activity to deter, disrupt and detect fly tippers”.

The blue Hino 700 8x4 hook loader will be auctioned by Euro Auctions in Leeds on 27 November 2019.  The lorry can be viewed online at:  http://www.euroauctionslive.com/servlet/Search.do?auctionId=486&itemId=677982&catalogLink=categoryName%3D%26ringAuctionId%3D%26keyword%3Dhino%26auctionId%3D486

The Council is continuing to offer a £100 reward to anyone who provides evidence that leads to the successful conviction of any person, business or other organisation involved in fly tipping waste in the District.

Anyone who witnesses fly tipping in the District is urged to report it to Cannock Chase Council by calling 01543 462621. Key information to pass on includes: