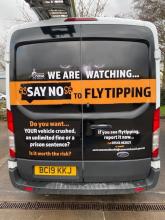 Cannock Chase Council is undertaking a new campaign to highlight `the blight of fly tipping`.

Called `We Are Watching` it uses radio advertising, social media and vinyl artwork on  Council vehicles to get over the message that fly tipping creates an unsightly mess, that through CCTV offenders can be caught, and that residents can play their part by reporting fly-tippers.

The campaign is the latest part of the Council’s plan to deter, disrupt and detect waste crime.

A social media plan has messages and posts over an eight-week period aimed at increasing local awareness of the damage fly tippng does, not just to our environment, but to the vulnerable people who are often conned out of money to dispose of waste, only to find criminals have dumped it.

Whilst advertising on Cannock Chase Radio is designed to get to the heart of communities, with regular reminders of the damage fly tippers can do to local places cherished within the District.

It is hoped this latest campaign, coupled with the recent deployment of CCTV in fly tip hotspots, will encourage residents to be more vigilant and to let the Council know where to target its efforts.

Mike Edmonds, Head of Environment and Healthy Lifestyles at Cannock Chase Council, said: “The Council really is stepping up its efforts to tackle this blight of fly tipping. The latest radio adverts and social media posts follow the recent announcement on the deployment of CCTV, the Council’s £250 reward for reports resulting in fly tipping prosecutions and the use of Council housing, cleansing and refuse vehicles to get the message over will make it even more visible.

“I also want to reassure residents that we are looking at ways to use CCTV to name and shame persistent dog fouling offenders and that we continue to post signs and information cards in any streets where residents feel this is a cause for concern.

“Residents should not hesitate to let us know where the problem areas are so we can work together to tackle this irresponsible behaviour and keep our District clean.”

A Council vehicle carrying the message `We Are Watching… Say No To Flytipping`.