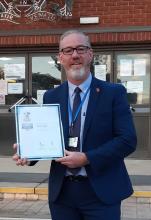 Councillor Martyn Buttery has been appointed as the first Councillor to take on the role as Armed Forces Champion for Cannock Chase District.

Councillor Buttery was officially appointed at Cannock Chase Council’s meeting on 2 March 2022.  The appointment will help to strengthen the relationship between the Council and the armed forces community.

Councillor Buttery was nominated, as he has previously served in the armed forces.  He has already established a relationship with ‘Help the Squaddie’ a charity based in Rugeley, who support ex-military personnel living in Staffordshire.

The role will help facilitate support to individuals connected to the armed forces, by helping to unblock any issues they may have around housing or employment or signposting them to any support that is required.  It will also support engagement with residents, local businesses, community groups, partner organisations and the armed forces.

Councillor Martyn Buttery said “I am extremely proud to represent the District as Armed Forces Champion.  It is important to me that those who serve or have served in Her Majesty’s Armed Forces are appreciated and represented for the contributions that they have made. I am looking forward to strengthening our relationship further with our armed forces community.

Cannock Chase Council has a long standing and connection with the armed forces, with both the Mercian Regiment and Staffordshire Regimental Association granted the Freedom of Entry to the District.

In 2016 the Council signed the Armed Forces Covenant and since then has worked with Veterans groups and helped support recruitment to Regular and Reserve branches and cadets.

The award was first made to the Council in 2016 and is revalidated every five years.  The Council retained its silver award for its continued commitment to the armed forces in a ceremony in 2021.  The award was collected by Councillor Buttery.

The purpose of the Community Covenant is to encourage support for the armed forces community (past and present, families and widowers working and living in Staffordshire and to recognise and remember sacrifices made by the members of this community.

Some examples of the support we currently provide are:

The Council is also part of the Defence Employer Recognition Scheme which encourages employers to support defence and inspire others to do the same. The Council has been awarded, for the second time, a Silver Award for its commitment to the armed forces community.

You can find out more on the Council’s website at www.cannockchasedc.gov.uk/afc