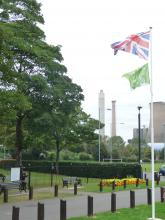 Parks and green spaces across the country will be raising their Green Flag Award with pride in a year when millions of people have seen the value of having great quality green spaces on their doorstep.

Among them will be Cannock Park, Hednesford Park, Ravenhill Park, Elmore Park, Stile Cop Cemetery and Castle Ring which are raising a Green Flag Award. Castle Ring has also achieved the much-coveted Green Heritage Site Accreditation for its management of the historic features. The accreditation is supported by Historic England.

The Green Flag Award scheme, managed by environmental charity Keep Britain Tidy under licence from the Ministry of Housing, Communities and Local Government, recognises and rewards well-managed parks and green spaces, setting the benchmark standard for their management across the United Kingdom and around the world.

Councilllor Christine Mitchel Portfolio Holder for Culture and Sport said “Parks, open spaces and cemeteries have been opened and staffed since the lockdown began, as the Government quite rightly indicated the importance of parks to people’s health and wellbeing. Our parks, cemeteries and play areas have had a levelling effect as they are open to all and now hopefully hold a special place for people in the midst of a pandemic. I would like to thank all of the parks, grounds maintenance and cemetery staff that have continued to work throughout the pandemic that has clearly contributed to these fantastic awards been retained by Cannock Chase Council.”

Commenting on Cannock Chase Council’s success, Keep Britain Tidy Chief Executive Allison Ogden-Newton OBE said: “This year, more than ever, our parks and green spaces have been a lifeline and we know that millions of people have used them to relax, meet friends, exercise or simply escape for a short time.

“It is testament to the incredible dedication and hard work of parks staff and volunteers that, despite the challenges that went along with record numbers of visitors, Cannock Chase Council has achieved the highest international standards for Cannock Park, Hednesford Park, Ravenhill Park, Elmore Park, Stile Cop Cemetery and Castle Ring demanded by the Green Flag Award.”