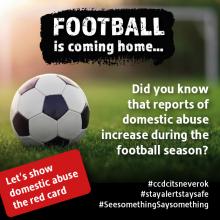 Cannock Chase Council is urging football fans to ‘show domestic abuse the red card’ during the football season which will be watched by many at home.

Research shows that incidents of domestic abuse rise sharply during major football tournaments by up to 25 per cent.

With the first football game kicking off this week, people will be watching the games from their homes due to the pandemic. This again could increase tensions within households, resulting in incidences of domestic abuse.

In response to this, the Council’s Community Safety Partnership has teamed up with local partners including Staffordshire Police, New Era (domestic abuse service), the Staffordshire Commissioner’s Office and local authorities across Staffordshire to deliver some important messages.

The new campaign ‘Football is coming home’ raises awareness of the support services available for both victims and perpetrators during these unprecedented times. A useful contact card will be distributed across the District by local PSCO’s as well as a range of online messages and advertising through the Council’s Facebook and Twitter feeds.

The message is not that football itself is responsible for domestic abuse. Football can be a source of community, where most fans watch a game without becoming aggressive. However, it does course some individuals within our society to become violent and vent their anger on those who are closest to them – including their children.

The campaign encourages perpetrators of domestic abuse to get help from New Era Domestic Abuse Service on 01785 601690, an organisation which offers specialist domestic violence prevention services.

The campaign also encourages victims, individuals and families who have concerns to report abuse and get support from New Era’s Staffordshire and Stoke-on-Trent 24-hour confidential helpline on 0300 303 3778 or access their 24/7 live chat facility at www.new-era.uk

Councillor Andrea Muckley, Leader of Crime and Partnerships, said: “It is a sad fact that incidents of domestic abuse rise sharply during major football tournaments. This campaign will raise awareness of the support services available to both victims and perpetrators as well as sending out a clear message that domestic abuse is completely unacceptable.

“The coronavirus outbreak has led to an increase in domestic abuse but with a reduction in the number domestic abuse cases reported. This may be due to self-isolation potentially aggravating existing abusive behaviour and victims in danger of finding it harder to report abuse and seek help”

“I would urge you to get help now and show domestic abuse the red card”.

Chief Inspector Rebecca Hyde for Staffordshire Police said: “For many for the return of the football season is welcomed but for others it is a time of dread due to the heightened risk of domestic abuse.

“If you recognise that you often take it out on your partner, when the game doesn’t go your way, we want you to know that there is support available to help you change. Equally if you are the victim of domestic abuse report this to the police, always dial 999 in an emergency or seek support from one of the many domestic abuse support services available locally.”

Deputy Staffordshire Commissioner for Police, Fire and Rescue and Crime Sue Arnold, who leads on the domestic abuse portfolio on behalf of the Commissioner, said: “Victims of domestic abuse continue to suffer during the pandemic, with many feeling unsure where to access help. We’ve invested even more into services to ensure victims get the support they need, when they need it.

“Football coming into the home could add to already heightened tensions for some, and during major tournaments, we generally see a sharp rise in domestic abuse cases. We’re working hard with our local clubs, especially Burton Albion FC, who are one of our domestic abuse champions, to promote the message that domestic abuse is never acceptable.”