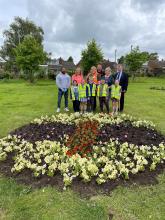 Cannock Chase Council in partnership with Inspiring Healthy Lifestyles, the Community Lottery funded, Chase Up team, and The Friends of Cannock Stadium have planted seasonal bedding plants at the Stadium Site on Pye Green Road.

The planting project was approved in March 2020, when Cannock Chase Council’s Cabinet approved to spend £25,000, to improve the site through the planting of flower beds, landscape improvement works and the inclusion of an eco-trail. The money has been allocated from Section 106 funds, collected from housing developments in the Pye Green area.

The design for the planting beds came from various consultation events, held at local schools and community groups, to get their thoughts and ideas, these have been incorporated into the design. Children from Year 3 at Moorhill Primary School, helped with the planting.

Jack Moody Ltd was appointed by Cannock Chase Council to prepare the area ready for planting this week. The proposals include plants of nine different colours, representing the official colours of the Commonwealth Games 2022, which is due to commence across the region and on Cannock Chase in July 2022.

Over the last few months, improvement works have been carried out on site including resurfacing works to the existing BMX pump track.  Plans are also underway to develop a wheeled sports area as part of the future development works. This will be located near the centre of the site with direct access from main car park, a further consultation and engagement programme will be launched in the summer.

Councillor Adrienne Fitzgerald, Portfoilo Leader for Housing, Heritage & Leisure said, “I am delighted with the improvement works that have taken place at The Stadium site so far, and there are lots more to come.  It’s great that everyone has come together to get the beds planted.  We are privileged to have the Commonwealth Games in Cannock Chase this year, so the planting in the Commonwealth colours, is an extra special touch.”