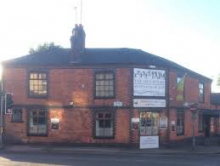 Cannock Chase Council has revoked the premises licence for the Hen House Sports and Music Bar in Market Street, Hednesford after people were found to have been drinking and in contravention of the regulations introduced by government in March.

On 28 March 2020, following a complaint received about people gathering in a pub, officers from Staffordshire Police entered the Hen House Sports and Music Bar on Market Street and discovered a number of people within it who had been drinking.   The owner of the premises had already been given a warning letter on 25 March 2020 from the Council’s Licensing Unit.

The Health Protection (Coronavirus, Restrictions) (England) Regulations 2020 placed restrictions on people leaving their homes and gathering together without reasonable excuse and prevented the sale of alcohol for consumption on premises since March. Up until 4 July 2020, premises were only allowed to open for off site sales of food and drink where permitted.

The police subsequently reported this matter to the Council’s Licensing Unit and the Council served a Prohibition Notice on 1 April 2020 requiring immediate closure of the premises.

As a result of wider investigation, Staffordshire Police requested that the Council review the premises licence on the basis that the owner failed to ensure that the licensing objectives of preventing crime and disorder and ensuring public safety were promoted.

Councillor Christine Martin, Leader of Health and Wellbeing said, “Sadly, there have been instances of some pubs flouting the regulations since March. The Council will not hesitate to clamp down on offenders and work with the police on enforcement. The regulations are there for a very important reason.

“Allowing the premises to be open to the public, albeit behind closed doors, and allowing persons to attend and consume alcohol on the site, facilitated a gathering of people (not from the same household) in one place and put themselves, the police and the wider public at risk.

“We believe the only effective way of protecting the public from harm is the revocation of the Hen House Sports and Music Bar Premises Licence”.

Pubs and other premises such as restaurants, cinemas. theatres, bingo halls were closed by the government on Saturday 21 March 2020.

The Council’s Environmental Health Department and the Licensing Unit are actively working as part of a Staffordshire wide enforcement protocol to ensure licensed premises across the District follow the current regulations which have been introduced as a result of the pandemic.