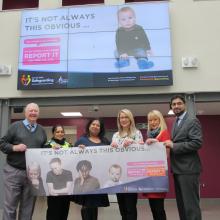 Valentine’s Day should be about celebrating the love and affection between loved ones. However, this will not be the case for some men, women and children; Valentine’s will just be like any other day.

The Community Safety Partnership at Cannock Chase Council has launched a new campaign to tackle adult and child abuse.

The campaign named ‘See something, Say something’, aims to raise awareness of abuse and encourage people to report any concerns they may have about an individual. It forms part of a 12 month campaign programme targeting vulnerable adults and children.

The campaign has been split into two elements; safeguarding and vulnerability.

The safeguarding element is the first phase and focuses on the key categories associated with child and adult abuse. The visuals portray an image of a potential victim with the word ‘help’ embedded on them. Running alongside the image is the message ‘It’s not always this obvious’.

Printed material including posters and information leaflets will also be displayed in key venues and distributed via support local agencies.

The vulnerability element will be the second phase of the campaign and will draw on themes taken from local cases. The creative will show that you don`t always know what is happening behind closed doors or on people`s phones. This will be rolled out later in the year.

An official campaign launch took place at South Staffs College – Cannock Campus yesterday with supporting partners.  The campaign artwork has been displayed on the large plasma screen in the main entrance area.

Councillor Carl Bennett, Leader of Crime and Partnerships, said: “Everyone has a part to play in keeping vulnerable adults and children safe from abuse and neglect.

“The Council is committed to ensuring people are aware of the signs associated with abuse and making sure people report any concerns they may have about an individual.

“As part of this campaign, the Council will also be recruiting staff to become Safeguarding Champions who will help drive these messages forward.

“I would urge anyone who suspects abuse to report it”.

Yaseen Akhtar, Assistant Principal - Student Services / Learner Services, said: “South Staffordshire College is proud to work alongside the Community Safety Partnership to improve the levels of safeguarding awareness amongst the local community. We all have a social and professional duty to identify and support others during the most vulnerable stages of their life with access to our highly trained staff”.

For further information about the `See something, Say something` campaign, contact the Partnerships team on 01543 464638 or email partnership@cannockchasedc.gov.uk