This former colliery site now supports a wealth of wildlife and is a fine example of how the open mosaic habitat of former industrial sites can greatly benefit wildlife. 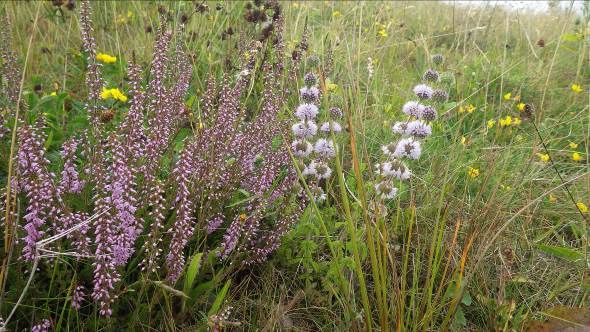 The slopes of the site are becoming heath like in nature and on the top of the old pit mound there is a wetland area of open mosaic habitat and pools. The site also has areas of more recent deciduous woodland plantations.

The reserve is an important site for butterflies. The diverse flora supports a wide range of species including common blue, small heath, comma, ringlet, essex skipper, and dingy skipper. The site is of particular importance for the dingy skipper which has undergone a very severe decline in numbers due to habitat loss. The West Midlands area is one of its main UK strongholds where it is now almost entirely confined to brown field sites.

The dingy skipper lays its eggs on birdsfoot trefoil which grows in abundance on the reserve but chooses only those plants growing next to bare ground where the temperatures are higher.

The nature reserve provides a safe nesting site for a range of species the most important of which are associated with open treeless habitats. These open areas support declining species such as the skylark whilst wetland areas attract snipe and lapwing.

In late spring and summer the nature reserve is a mass of colour as the various plant species come into flower.  In addition to common plants such as birdsfoot trefoil, oxeye daisy, ladies bedstraw and catsear there are much rarer species present such as the pennyroyal. This legally protected plant is now very rare in England due to loss of suitable habitat. It cannot survive competition from other plants which is why it thrives on the poor soils that are typical of the site.

Although it is the open habitats that are of the greatest conservation value parts of the nature reserve support developing woodland communities. These areas include a wide range of more common species including blackcap, willow warbler, and chiffchaff.

A wide range of birds of prey have been recorded using the nature reserve including hobby, merlin, peregrine falcon, kestrel, and buzzard.

The importance of this site for wildlife conservation lies in its open nature with poor soils and abundant wildflowers. Whilst these ideal conditions may persist for decades natural processes dictate that they will not do so indefinitely without intervention. The nature reserve would eventually be taken over by scrub and trees forcing out most of the species that are of importance. Cannock Chase Council undertake regular works to set back this process by removing unwanted scrub and in selected areas scraped back the developing vegetation to reveal bare ground. This resets the clock and allows for the re-establishment of early stages of plant colonisation that are vital in maintaining the conservation value of the nature reserve.

Where woodland is being allowed to establish the edges are scalloped to provide warm sheltered habitat for butterflies and other insects. You will also see areas where hazel other shrub species have been cut back to ground level. This is traditional coppice management which is carried out on a cycle of approximately ten years. It is excellent wildlife habitat as the shrubs gradually grow back to provide a succession of habitat conditions from flower rich grassland following cutting to dense cover for nesting birds at the end of the  management cycle.

The slopes are currently being managed as a heathland re-creation under a Higher Level Countryside Stewardship scheme. This involves removing invasive scrub. The slopes and the wetland area are grazed by our Dexter cattle at suitable times of the year.

There is limited parking available off Hednesford Road and off  Newlands Lane. The site has circular route with a stone surface. A more challenging route around the pit mound may also be taken. This route is uneven and can be muddy and slippy in wet weather due to the nature of the pit spoil that makes up the site.

Part of the nature reserve is set aside from public access to provide a safe sanctuary area for wading birds such as the snipe and nesting sites for ground nesting skylarks. Please assist with their conservation by respecting the access restrictions.

The site is located on the edge of Heath Hayes near Five Ways Island. The site can be approached by Hednesford Road and Newlands Lane.

Coppice Colliery opened 1893 before closing in 1964. It took two years to sink the shafts to the 12 coal seams some 292m below, the spoil being dumped on the heathland and grassland surrounding the pit head.